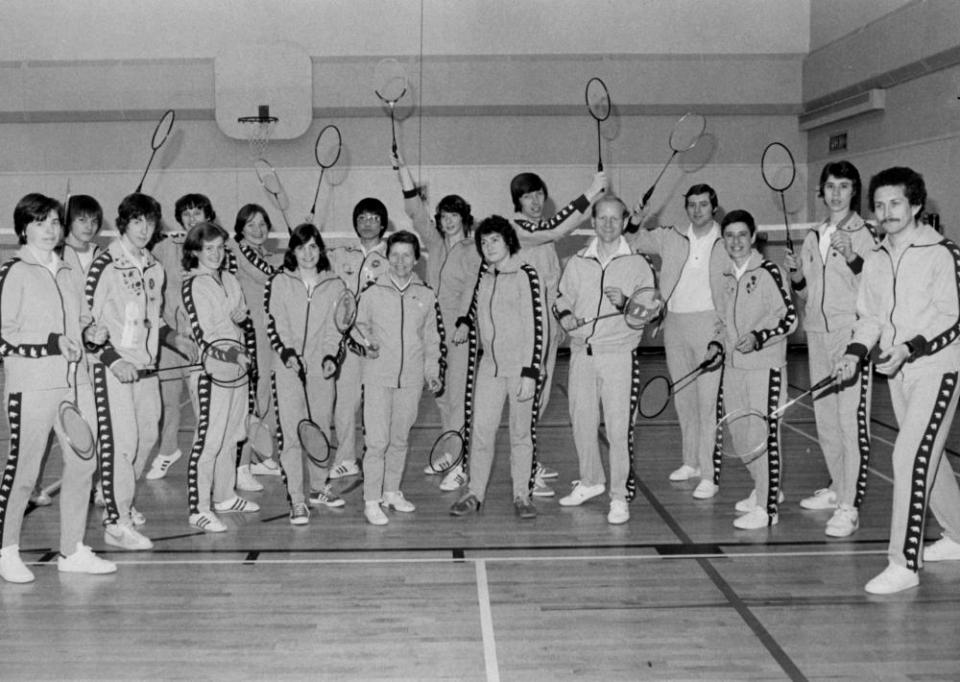 The Arctic Winter Games is a high profile circumpolar sport competition for northern and arctic athletes.  The Games provide an opportunity to strengthen sport development in the participants’ jurisdictions, to promote the benefits of sport, to build partnerships, and to promote culture and values.  The Games celebrate sport, social exchange and cultures. The Games provide an opportunity for the developing athlete to compete in friendly competition while sharing cultural values from northern regions around the world.

In 1967, Stuart Hodgson was the commissioner of the Northwest Territories. He was in Quebec City to cheer on NWT athletes at the Canada Winter Games. While watching the NWT badminton team compete, he stepped out briefly to use the facilities. By the time he returned it was all over.

His sense of disappointment was shared by Cal Miller, the financial advisor to the equally out matched Yukon team. It was Cal who suggested a distinctly northern games - as a forum in which athletes from the "circumpolar North" could compete on their own terms - on their own turf - and even in their own sports. It took one phone call and Alaska Governor Walter Hickel was also on board. The papers were signed - and the first Games were held in Yellowknife two years later - with three contingents from: the Yukon, Northwest Territories and Alaska.

Mr. Hodgson passed away in December at the age of 91. This year's Team NT is a small part of his great legacy. 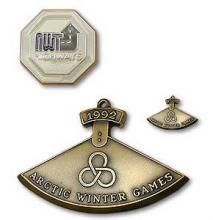 It doesn’t take long to figure out that the Arctic Winter Games are uniquely northern – a real good illustration hangs around the neck of every winning athlete.

Athletes at the Arctic Winter games are the only ones in the world to compete for gold silver and bronze ulus. The ulu, in its traditional form is indigenous to the Arctic. It’s a woman’s skinning knife with a central handle and a semicircular blade. The blades were made from slate and bone. The handles, of antler, wood or ivory were often crafted into identifiable works of art.

Ken McKinnon, the first President of the Arctic Winter Games' International Committee recognized that to make the Games stand out from any other competition, they would have to build on the uniqueness of the north and the cultural ties that bind northerners together.  The ulu offered a perfect medal – a symbol of the North that is almost as well known as the Polar Bear and one that has come to represent excellence in northern athletic performance. 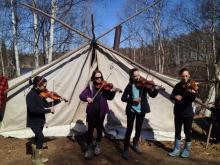 Cultural delegates are fully accredited participants in the Arctic Winter Games. They wear team uniforms, march with the athletes at the opening and closing ceremonies, and receive ulus to recognize their role in the event. 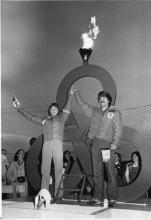 At every Arctic Winter Games, the Arctic Sports and Dene Games offer a unique display of cultural exhibition and tremendous athleticism.

They were originally developed, not as sporting events or competitions but as training tools to mind and body for the rigors of living and surviving in the North.

Each test an athlete’s strength mental focus and patience. Inuit games range from the two-foot high kick combining power, coordination and control to the brute strength and endurance of the knuckle hop. If it sounds painful, your right.  The ability to withstand pain could — and often did — save lives in our harsh Arctic climate.

The Dene games include events like the snow snake – a technique for hunting caribou where a spear is thrown underhand along the ground. The object of the stick pull, traditionally, was to build arm strength for fishing and hunting.  The pole push, was practiced for hauling canoes. 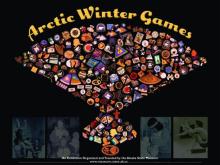 There’s one Arctic Winter games event, in particular, that brings out the drive to win in young and old alike. Competition is fierce, passions get high, participants are driven and loyalties are bought and sold.

In the early years, designs for pins were simple. At the Sheferville Games in 1976, there were only 9 pins issued. The official pin count for each of the past three games has been well over 100.

Most athletes and cultural performers are issued a full set of pins to take to the games for trading. Contingents naturally compete amongst each other to create that one pin – that will be the most coveted and valuable for the games.

But come the end of the week - for spectators or athletes alike, pins become a way to commemorate the fact that you were a part of one of the North's foremost events.

Alaska has taken the home the most medals in 17 of the past 23 games. Their best performance was a record haul of 292 medals at the '78 games in Hay River - Pine Point.

The Northwest Territories has topped the medal standings five times; twice at games hosted in Yellowknife. The '98 games stand up as the best performance ever by NWT athletes with 190 medals.

The only other jurisdiction to win the medal race has been Northern Alberta who won 138 ulus at the Fort McMurray Games in 2004.

Many people, however, point to the Hodgson trophy as a true measure of winning at the Arctic Winter Games. It is given to the contingent that best exemplify the ideals of fair play and team spirit. In the 13 times that it has been awarded the NWT has won it twice; in 1992 and 1996. 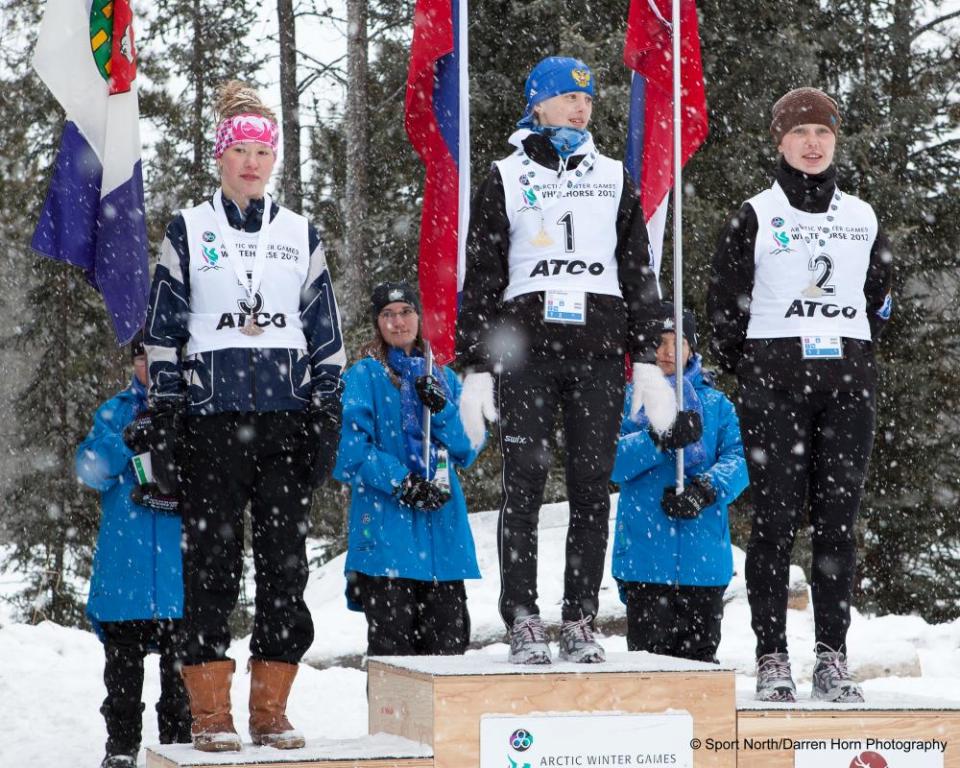 A Wray of Hope

In 1988, the games in Fairbanks had just finished; and with only three jurisdictions involved, the interest and excitement was gone. Alaska was threatening to pull out.

At a special meeting to consider the future of the Games, the GNWT's Gordon Wray advocated expansion and change. He spoke strongly about more contingents; Alberta Greenland and northern Quebec were on his list.

Other organizers and political leaders chimed in with ideas like increasing the cultural component of the games, placing more emphasis on Arctic Sports, adding Dene Games and focussing the games on youth.

Led by Gordon Wray, games organizers and politicians decided that the games were worth saving.  Almost years later, as we prepare to celebrate the 26th edition of the Arctic Winter Games -  we can look back knowing they were right!

The original symbol of the Arctic Winter Games was three interlocking circles outlined in white on a blue background.  PJ Webster is credited with coming up with the design for the first games in 1970. He took home 100 bucks for his concept of three rings representing the three participants – Alaska, the Yukon and the NWT.

As more contingents signed on, organizers had to rethink things – they decided that the rings would represent the three components of the games – sports, culture and friendship or social interchange.

In 1994 a colored ribbon was added representing the northern lights.  Nine years later, the background was changed to black – reflecting the darkness of the North and a white border added around the entire logo symbolizing the 55th parallel and circumpolar North.

One of the longstanding traditions of any games is the parade of athletes as they walk out to enjoy the opening and closing ceremonies. It is one of the most exciting moments for athletes, coaches, parents, friends and spectators alike; a high point of emotion, pride, noise, colour and celebration.

Over the years, the event has also become a fashion show of team uniforms and styles.  In fact, many sports refer to their team, jackets and pants as their "walk out" uniforms.

While the opening ceremonies feature a regimented march of teams and colors - the closing ceremonies are the opposite. As they gather to say goodbye, athletes will converge in a swarm of colours; no longer divided by competition or uniforms and united as friends. Many will even trade their jackets to commemorate what they have shared. 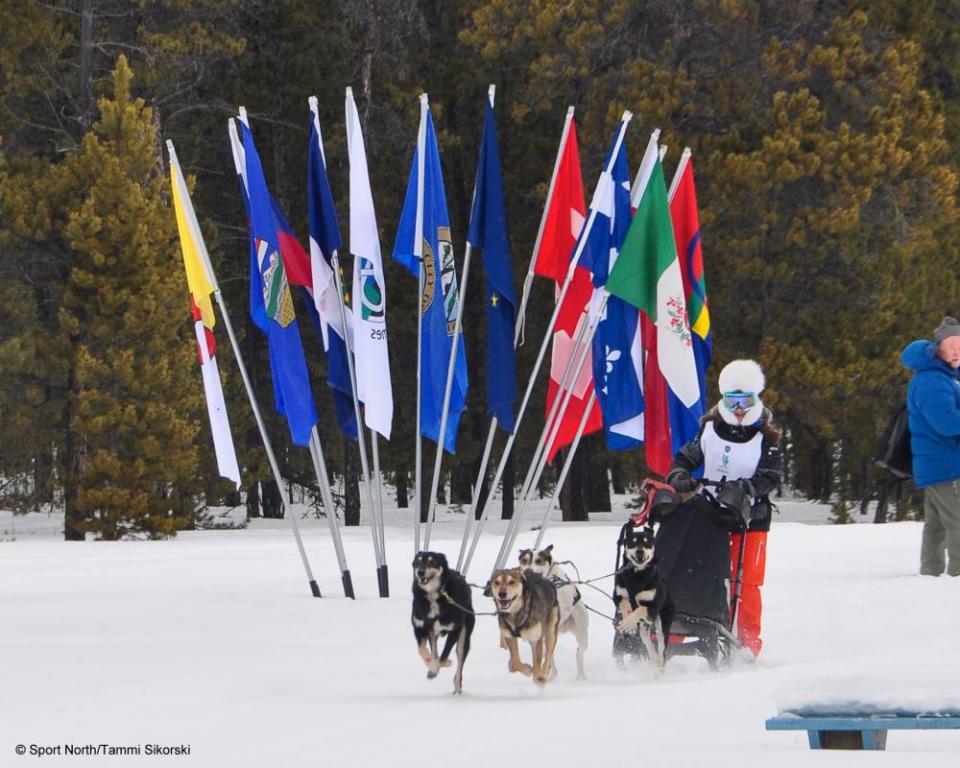 The first Arctic Winter Games in 1970 featured only three teams: the Northwest Territories, Yukon and Alaska.

Northern Quebec participated on and off beginning in 1972; even hosting the Games in Schefferville in 1976.

After the 1988 Games in Fairbanks Alaska, a special meeting was held to consider whether there was even any future left for the AWGs.  It resulted in an  invite to Greenland, and Russia and the welcoming of a full new partner in Northern Alberta.

In 2000 Northern Quebec returned to the games as Nunavik alongside Nunavut. Two new contingents showed up in 2004: the Sami people from northern Scandinavia and the Province of Yamal Russia.

That brings the total to nine contingents from across the circumpolar North that will compete in Nuuk.

At each Arctic Winter Games, the Hodgson Trophy is presented to the contingent whose athletes best exemplify the ideals of fair play and team spirit.

The distinctive trophy is a piece of Inuit artwork donated by NWT Commissioner Stuart Hodgson.  It was introduced in 1978.

It is an engraved narwhale tusk mounted on a soapstone base. Near the top, a soapstone bear clings to the tusk, symbolizing those participants who are "reaching for the top" in competition and fair play.

The actual Hodgson Trophy is kept on display at the Sport Yukon Hall of Fame in Whitehorse. What is presented to the winning contingent is actually a framed photograph of the trophy.

Individual members of the team also receive a distinctive pin in recognition of their accomplishment.

The NWT has been awarded the prize twice. 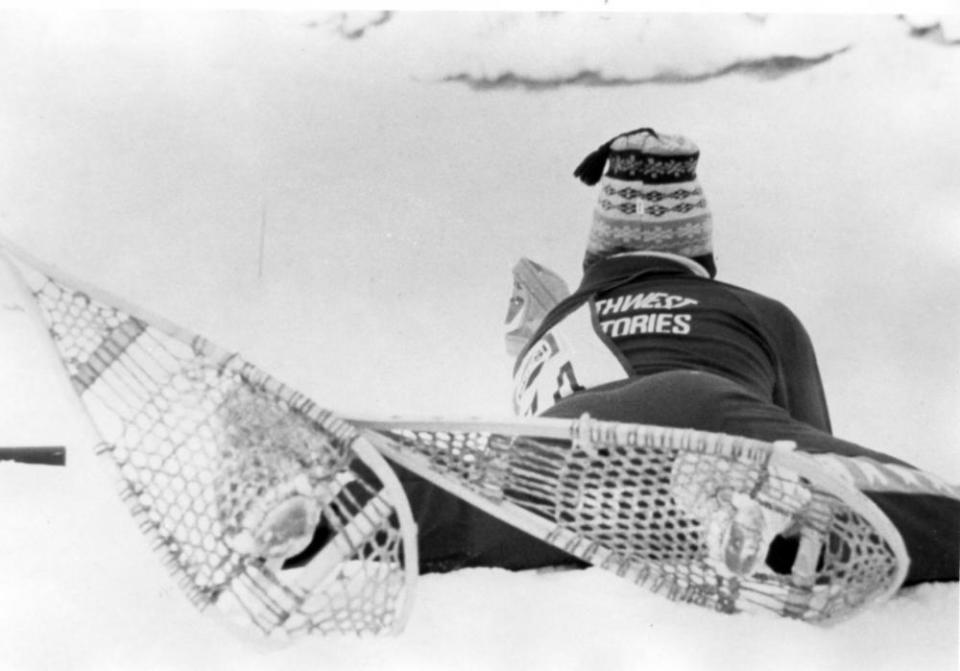 The NWT has also hosted the Arctic Winter Games seven times. Five of those games took place in Yellowknife.

Among the many innovations featured in those games was the Inukshuk Express; a four-car train that shuttled athletes, coaches, officials and fans along the CN rail line between Hay River and Pine Point.

The very first run of the Inukshuk Express was even set up on by traditional train robbers who swooped in on snow machines to kidnap the dignitaries and guzzle Champaign before disappearing back into the bush.

It was all part of the fun and hospitality that characterized the Hay River and Pine Point games; considered by many to have been the best games ever. 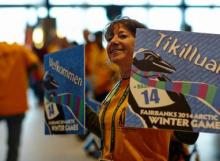 Volunteers are the backbone of the Arctic Winter Games.  Without them these amazing gatherings of competition and goodwill simply would not be possible.

It begins with the organizing committees and the many volunteers that make up the host society.  It includes coaches, officials and timekeepers - not just during the games, but in the many months of training and practice that lead up to this event.

And behind these easy to see volunteers, there are even more volunteers: men, women and children who unloaded beds, park cars, erect signs, process applications, hooked up computers drive shuttle busses and on and on and on.

Forty-two years ago, the first Arctic Winter Games in Yellowknife ended in a torch light parade of all the participants and volunteers.  It was an amazing parade that nobody got to see – because they were all in it.